Washington Mill Elementary School opened on September 3, 1963, with approximately 250 children enrolled in grades one through six. Our first principal was David M. Hampton. Washington Mill was designed by the architecture firm of Graef, Mintz, and Associates, Inc., and was built by the Allen Minnix and Sons construction company at a cost of $496,457.

Washington Mill Elementary School opened at a time when Fairfax County Public Schools (FCPS) was in the process of racially integrating its schools. This process began in the early 1960s and culminated at the end of the 1965-66 school year. Originally, only white children were admitted to Washington Mill. Prior to integration, African-American children living in our area were bused to Drew-Smith Elementary School located at Gum Springs on Route 1. Today, Washington Mill Elementary School enjoys rich diversity in its population and the school community views diversity as a strength. Our community celebrates family heritage through a yearly program focusing on each student's family history.

Did you know that when Washington Mill opened there were no kindergarteners in our school? A kindergarten program was piloted in several schools in 1967 and proved so successful that one year later FCPS implemented kindergarten county-wide. FCPS enrolled approximately 8,000 children in kindergarten in September 1968.

From the mid-1970s into the early 1980s, student enrollment began a gradual decline resulting in the closure of several schools in the eastern part of Fairfax County. The closures affected neighborhoods that saw the earliest growth post-World War II.

Enrollment at Washington Mill remained relatively stable during the 1970s, averaging between 470 and 420 students. However, enrollment dipped significantly during the 1980s, falling to a low of 371 in 1985. The closure of several schools along the Route 1 corridor, and the subsequent redistricting, rebounded enrollment into the high 400s during the late 1980s. It was during this period that the first addition to Washington Mill was constructed.

Like most elementary schools constructed in the 1960s, Washington Mill was built without a gymnasium. During the early years, physical education was taught by teachers in their classrooms, or outdoors through structured play. In 1988, Washington Mill received its first building-wide renewal. A new building wing, with a gymnasium and music room, was constructed. And, to the relief of students and teachers alike, air conditioning was installed building-wide.

A second addition to our school was constructed in 1996. Four classrooms were added, providing additional space for the School Age Child Care (SACC) program, and our library was modernized. 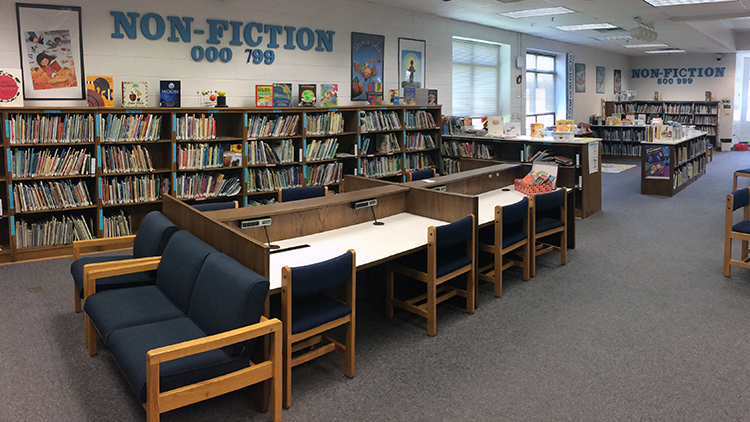 During the first decade of the 2000s, the student population in southeastern Fairfax County sharply rose. A 10-room modular facility was added to our building in 2007, and by 2013 our population grew to 657 students. Planning for a second building-wide renewal began in 2018.

While many things have changed at Washington Mill over the years, one thing has not–our school mascot. Our mascot has remained the Colonials since our founding. However, our school colors have changed many times by student vote, and are currently red, white, and blue. 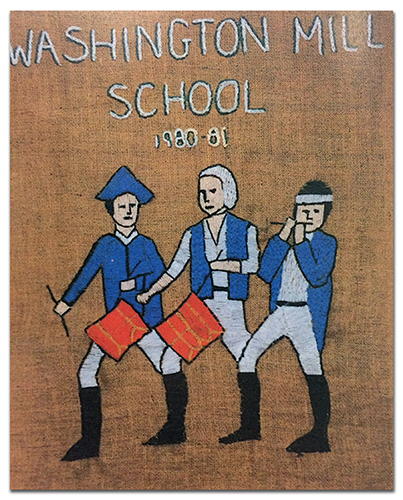 In 2007, the Mount Vernon Ladies' Association, which owns and operates the Mount Vernon estate, printed 2,000 limited-edition portraits of George Washington for distribution free of charge to schools throughout the United States as part of their "George Washington's Return to School" initiative. In January 2008, First Lady Laura Bush visited Washington Mill and presented the first of these portraits to our school.

The Washington Post reported: Bush told students they could look up to Washington, who was "a normal person, just like you and I are." He had pancakes for breakfast, played with a foxhound named Vulcan and loved to dance and play games, she said. He also, of course, served the nation. "Every time his country called on him to ask him to do something, he did it," she said. "You can honor George Washington by following his good example of good citizenship."

Learn more about President Washington and the inspiration for our school's name in this video produced for Fairfax County Public Schools’ cable television channel Red Apple 21.

The name Gloria Tarr may be unfamiliar today, but to the students and faculty of Washington Mill during its earliest years this name had special significance. Gloria Tarr was a teacher at Washington Mill from 1963 to 1964. She passed away in May 1964, and her death was a stunning blow to the Washington Mill community. The P.T.A. established a library fund in her memory and on November 17, 1964 our library was dedicated in her honor.

She was a sincere friend to education: to those children who came under her influence in the classroom, she was a friend, counselor, challenger, inspiration; to her fellow faculty members and school staff, she was a leader and guide, admired and respected for her convictions and ability, and for her devotion to teaching all of the children, and all of the child; to parents, she was the personification of a "good" teacher. Books were her friends, and she made them the friends of the children in her classes.
~ Donald E. Lytal, from the library dedication address.

Washington Mill has had nine principals since our building opened in 1963.